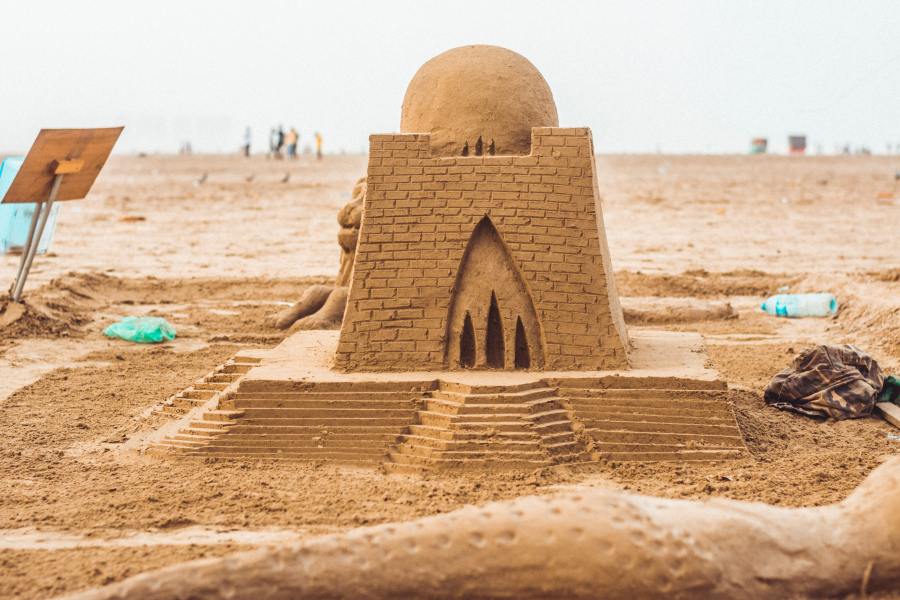 How could this be you may ask? Well, to understand this we need to first understand how we build knowledge at all.

How do we know anything at all?

Imagine a pyramid upside down. At the tip of the pyramid (now at the bottom), we have our most fundamental beliefs. Those could be beliefs like. I am real, I am my physical body, my parents are real, the world is logical. Those very basic beliefs we usually adopted when we were children. As we grew up we learned more and more about our environment and our selves – or so we thought. What really happened was that we were looking for ideas that confirmed our very early beliefs. And so we started building our castle of knowledge on top of sand.

A castle on top of sand

Philosophers often like to use a phrase called “a priori”. It means a truth that doesn’t need proof. A truth so obvious that it doesn’t need to be questioned. Do not be mistaken, this is a huge trap. An example for an a priori claim would be:

But is it really? The short answer: No. The long answer: If we ask the question 2+2=4 we completely neglect the fact that it needs someone to perceive that statement. So yes, it does make sense for a human, but what about an ant? Or what if there are higher beings for whom simplistic duality is ridiculously silly? Also, one must of course ask. in what context does 2+2=4? in a materialistic universe? Maybe, but what if there are entirely new and higher ways of understanding? I hope you can see that what is true in this case is entirely relative.

Why we don’t want to crash the castle

Now let’s imagine we deeply question one of those deep assumptions we have about reality. What would happen if we for example realize that, what we called real, actually has no reality whatsoever? Well, in fact, we would die. Or more so, the Identity that we have constructed for ourselves. Because after all, who we are, is really who we think we are. And as soon as we realize that our thinking always worked through as blurred lens, the idea of who we are collapses. That is why people are not willing to question their assumptions about race, religion, or even their favorite soccer team. Because their whole world view hinges on those beliefs. Our life, or what perceive as our life depends on it.

So we kind of know that all our beliefs that we have are built on top of illusions. Now the question remains, are we ready to question those? Are we ready to die, let go of our attachments to what we thought was true and be reborn again to a new, higher truth?